We are thrilled to announce that Fluentd has become the sixth CNCF Graduated Project! This is a huge recognition to the project and its community. Fluentd wide adoption by the Enterprise and contributions are in a continuous grow: we have more than 900 contributed plugins and more than 100k downloads a day!

Fluentd was created in 2011 by Sadayuki “Sada” Furuhashi, co-founder of Treasure Data, Inc., as an open source data collector for building a Unified Logging Layer, which unifies the data collection and consumption for better use and understanding of data. In November 2016, Fluentd was accepted as CNCF’s sixth hosted project after Kubernetes, Prometheus, and OpenTracing. 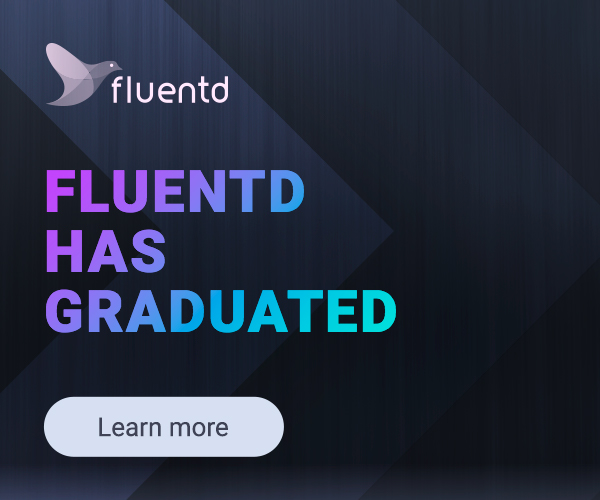 As of today, Fluentd is used by major companies to solve log collection and processing at scale: Microsoft, Redhat, and Google are a few names of its known users.

Fluentd's core maintainer, Masahiro Nakagawa (well known as @repeatedly on Twitter), said that he's thrilled to have had the opportunity to collaborate with the CNCF community and to grow its user base, and it's an honor to see Fluentd graduated. Today we celebrate this big accomplishment, and we continue looking forward to improving on upcoming Logging and data processing challenges.

Fluentd at Conferences on 2019

Fluentd team will be attending some conferences this year, save the date!

Subscribed to the RSS feed here.

Eduardo (@edsiper) is an Open Source Engineer at Treasure Data, he is part of Fluentd core team and maintains [Fluent Bit](http://fluentbit.io).

Want to learn the basics of Fluentd? Check out these pages.

You need commercial-grade support from Fluentd committers and experts?

©2010-2022 Fluentd Project. ALL Rights Reserved.
Fluentd is a hosted project under the Cloud Native Computing Foundation (CNCF). All components are available under the Apache 2 License.